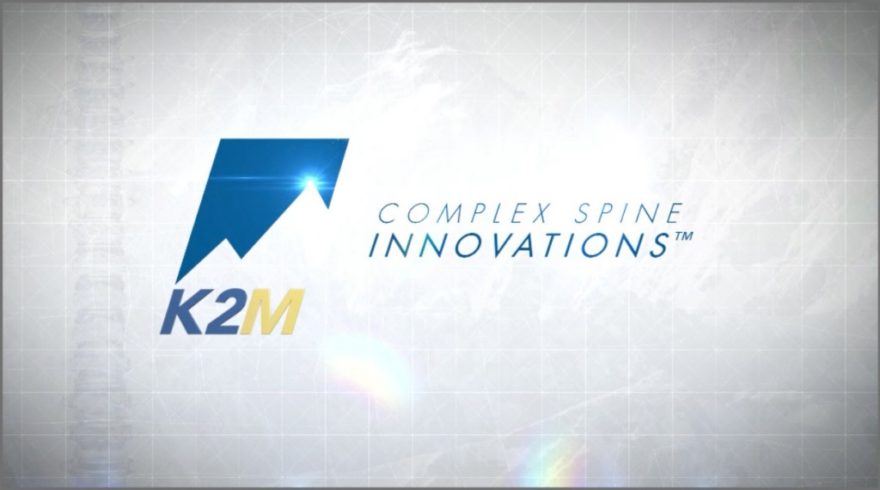 “Our third quarter sales growth of 16.5% in the U.S. was consistent with both our near-term expectations, and our long-term objective of revenue growth in the mid-to-high teens,” said President and Chief Executive Officer, Eric Major. “U.S. sales this quarter were driven primarily by a strong summer deformity season and the contributions from new customers adopting K2M’s innovative technologies across our procedure categories, but most notably in our degenerative and minimally invasive categories, which are benefitting from sales of our Lamellar 3D Titanium Technology platform. K2M offers the most comprehensive portfolio of FDA-cleared 3D-printed spinal devices on the market today and the surgeon community continues to show increasing awareness of our leadership position in this important area of the market.”

Mr. Major continued: “U.S. sales have increased 15% over the first nine months of 2016, driven by strong growth in each of our procedure categories—complex, minimally invasive and degenerative—which have increased sales 12%, 16% and 17%, respectively, so far this year. We are pleased to be reporting improving profitability as the year progresses. In addition, we look forward to continued progress throughout the balance of 2016 and have updated our full-year guidance expectations accordingly.”

Total revenue for third quarter 2016 increased $4.3 million, or 7.8%, to $59.3 million, compared to $55.0 million in the third quarter of 2015. Total revenue increased 8.7% year-over-year on a constant currency basis. The increase in revenue was primarily driven by greater sales volume from new surgeon users and newer product offerings, partially offset by a decrease in existing customer usage and decreases in both international direct and distributor revenue compared to last year.

By procedure category, U.S. revenue in the Company’s complex spine, MIS and degenerative categories represented 42.4%, 14.7% and 42.9% of U.S. revenue, respectively, for the three months ended September 30, 2016.

Gross profit for third quarter 2016 increased 5.8% to $39.8 million, compared to $37.6 million for third quarter 2015. Gross margin was 67.1% compared to 68.4% last year. Gross profit includes amortization expense on investments in surgical instruments of $3.5 million, or 5.8% of sales, for the three months ended September 30, 2016, compared to $3.1 million, or 5.7% of sales, last year. Third quarter of fiscal 2015 cost of goods sold included costs, net of recoveries, associated with medical device excise tax of $(0.1) million compared to no such expenses in the current period.

Other expense for the third quarter of 2016 increased $1.8 million to $1.9 million, compared to $0.1 million last year. The increase in other expense, net was primarily attributable to interest expense incurred on the capital lease obligation related to our headquarters and operations facilities as well as the Notes issued in August 2016, and an increase of $0.5 million in unrealized losses from foreign currency re-measurement on intercompany payable balances.  Foreign currency losses impacted operating results compared to last year due to changes in the average exchange rates of the U.S. Dollar, Pound Sterling and Euro applied to intercompany balances in both periods.

The Company is updating its fiscal year 2016 guidance expectations, which was recently reaffirmed on August 3, 2016.

Management will host a conference call at 5:00 p.m. Eastern Time on November 2nd to discuss the results of the quarter, and to host a question and answer session. Those who would like to participate may dial 888-670-2254 (913-312-1510 for international callers) and provide access code 3362399 approximately 10 minutes prior to the start of the call. A live webcast of the call will also be provided on the investor relations section of the Company’s website at http://Investors.K2M.com/.

K2M Group Holdings, Inc. is a global medical device company focused on designing, developing and commercializing innovative complex spine and minimally invasive spine technologies and techniques used by spine surgeons to treat some of the most difficult and challenging spinal pathologies. K2M has leveraged these core competencies to bring to market an increasing number of products for patients suffering from degenerative spinal conditions. These technologies and techniques, in combination with a robust product pipeline, enable the Company in the global spinal surgery market. Additional information is available online at www.K2M.com.

This press release contains forward-looking statements that reflect current views with respect to, among other things, operations and financial performance.  Forward-looking statements include all statements that are not historical facts such as our statements about our expected financial results and guidance and our expectations for future business prospects, including with respect to our international distribution partners in Australia and Japan.  In some cases, you can identify these forward-looking statements by the use of words such as “outlook,” “guidance,” “believes,” “expects,” “potential,” “continues,” “may,” “will,” “should,” “could,” “seeks,” “predicts,” “intends,” “plans,” “estimates,” “anticipates” or the negative version of these words or other comparable words.  Such forward-looking statements are subject to various risks and uncertainties including, among other things: our ability to achieve or sustain profitability; our ability to successfully demonstrate the merits of our technologies; pricing pressure from our competitors, hospitals and changes in third-party coverage and reimbursement; competition and our ability to develop and commercialize new products; aggregation of hospital purchasing from collaboration and consolidation; hospitals and other healthcare providers may be unable to obtain adequate coverage and reimbursement for procedures performed using our products; the safety and efficacy of our products is not yet supported by long-term clinical data; our dependence on a limited number of third-party suppliers; our ability to maintain and expand our network of direct sales employees, independent sales agencies and international distributors and their level of sales or distribution activity with respect our products; the proliferation of physician-owned distributorships; concentration of sales from a limited number of spinal systems or products that incorporate these technologies; loss of the services of key members of our senior management, consultants or personnel; ability to enhance our product offerings through our research and development efforts; failure to properly manage our anticipated growth; acquisitions of or investments in new or complementary businesses, products or technologies; ability to train surgeons on the safe and appropriate use of our products; requirements to maintain high levels of inventory; impairment of our goodwill or intangible assets; disruptions in our information technology systems; any disruption or delays in operations at our facilities, including our new headquarter facility; or an ability to ship a sufficient number of our products to meet demand; ability to strengthen our brand; fluctuations in insurance cost and availability; extensive governmental regulation; in the United States and foreign jurisdictions; failure to obtain or maintain regulatory approvals and clearances; requirements for new 510(k) clearances, premarket approvals or new or amended CE Certificates of Conformity; medical device reporting regulations in the United States and foreign jurisdictions; voluntary corrective actions by us or our distribution or other business partners or agency enforcement actions; a recall of our products; withdrawal or restrictions on our products or the discovery of serious safety issues with our products; possible enforcement action if we engage in improper marketing or promotion of our products; the misuse or off-label use of our products; delays or failures in any future clinical trials;  the results of clinical trials; procurement and use of allograft bone tissue; environmental laws and regulations; compliance by us or our sales representatives with FDA regulations or fraud and abuse laws; U.S. legislative or regulatory healthcare reforms; medical device tax provisions in the healthcare reform laws; our need to generate significant sales to become profitable; potential fluctuations in sales volumes and our results of operations may fluctuate over the course of the year; uncertainty in our future capital needs; failure to comply with restrictions in our revolving credit facility; continuing worldwide economic instability; our inability to protect our intellectual property rights; our reliance on patent rights that we either license from others or have obtained through assignments; our patent litigation; the outcome of potential claims that we, our employees, our independent sales agencies or our distributors have wrongfully used or disclosed alleged trade secrets or are in breach of non-competition or non-solicitation agreements with our competitors; potential product liability lawsuits; operating risks relating to our international operations; foreign currency fluctuations; our ability to comply with the Foreign Corrupt Practices Act and similar laws associated with our activities outside the United States; possible conflicts of interest with our large shareholders; increased costs and additional regulations and requirements as a result of becoming a public company; our ability to implement and maintain effective internal control over financial reporting in the future; the potential impact of any future acquisitions, mergers, dispositions, joint ventures, investments or other strategic transactions we may make; and other risks and uncertainties, including those described under the section entitled “Risk Factors” in our most recent Annual Report on Form 10-K filed with the SEC, as such factors may be updated from time to time in our periodic filings with the SEC, which are accessible on the SEC’s website at www.sec.gov.  Accordingly, there are or will be important factors that could cause actual outcomes or results to differ materially from those indicated in these statements.  These factors should not be construed as exhaustive and should be read in conjunction with the other cautionary statements that are included in this release and our filings with the SEC.

Use of Non-GAAP Financial Measures

Adjusted EBITDA is a non-GAAP financial measure and should not be considered as an alternative to net loss as a measure of financial performance or cash flows from operations as a measure of liquidity, or any other performance measure derived in accordance with GAAP and it should not be construed as an inference that the Company’s future results will be unaffected by unusual or non-recurring items. In addition, the measure is not intended to be a measure of free cash flow for management’s discretionary use, as it does not reflect certain cash requirements such as tax payments, debt service requirements, capital expenditures and certain other cash costs that may recur in the future.  Adjusted EBITDA contains certain other limitations, including the failure to reflect our cash expenditures, cash requirements for working capital needs and cash costs to replace assets being depreciated and amortized. In evaluating Adjusted EBITDA, you should be aware that in the future the Company may incur expenses that are the same as or similar to some of the adjustments in this presentation.  The Company’s presentation of Adjusted EBITDA should not be construed to imply that its future results will be unaffected by any such adjustments. Management compensates for these limitations by primarily relying on the Company’s GAAP results in addition to using Adjusted EBITDA on a supplemental basis.  The Company’s definition of this measure is not necessarily comparable to other similarly titled captions of other companies due to different methods of calculation.

The following table presents reconciliations of gross profit to adjusted gross profit and net loss to Adjusted EBITDA for the periods presented.

The following table presents a reconciliation of net loss to Adjusted EBITDA for our 2016 guidance:

(1)  Represents expected cash payments for rent on the Company’s new headquarters and operations facilities under the capital lease agreement, which begin in October 2016.