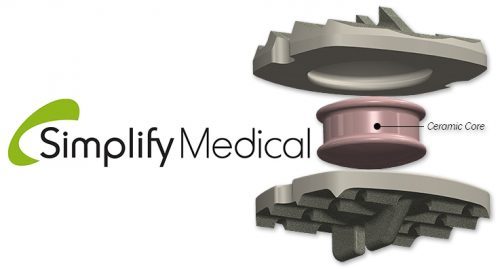 “Simplify Medical is committed to innovation that improves clinical outcomes for patients with degenerative disc disease,” said Simplify Medical CEO David Hovda. “We believe Simplify Medical has the largest and most impactful IP portfolio in the spine motion preservation space, and we continue to invest in technology to further optimize patient outcomes and surgical ease of use.”

The Simplify Disc is anatomically designed with low height implant options, as low as four millimeters, to treat a broad range of patients, including patients with smaller cervical disc spaces.

Composed of primarily non-metal materials (PEEK-on-ceramic), the Simplify Disc is designed to be viewed on magnetic resonance imaging (MRI) in order to minimize post-operative patient exposure to radiation from computed tomography (CT) scans currently necessary to view metal discs. While MRI is widely used pre-operatively for surgical planning, spine surgeons often switch to CT scans post-operatively in order to accommodate metal components, which can make it difficult to view the devices, as well as the facets and adjacent disc levels. However, CT scans have been shown to expose patients to ionizing radiation that equates to 400 to 550 chest X-rays per scan. The device is considered MRI-conditional, posing no known hazard in an MRI environment within prescribed conditions of use.

The Simplify Disc is being studied in two U.S. pivotal trials. The one-level, prospective trial comparing Simplify Disc with cervical fusion surgery at one level between C3 to C7 has completed enrollment. Use of the Simplify Disc in two levels of the spine is being studied in a second IDE trial in the U.S., which is approximately 40 percent enrolled, and enrollment is expected to be completed by the end of 2018. The two-level, prospective pivotal trial will encompass up to 200 patients at up to 18 centers, comparing cervical implantation of the device in two contiguous discs from C3 to C7 with two-level cervical fusion surgery. For information about eligibility or enrollment in the two-level pivotal trial, please visit http://www.simplifytrial.com/.

The Simplify Disc has received the CE Mark and is commercially available in select European markets. Early clinical data has shown substantial improvement in patient pain scores and functional improvement after treatment.